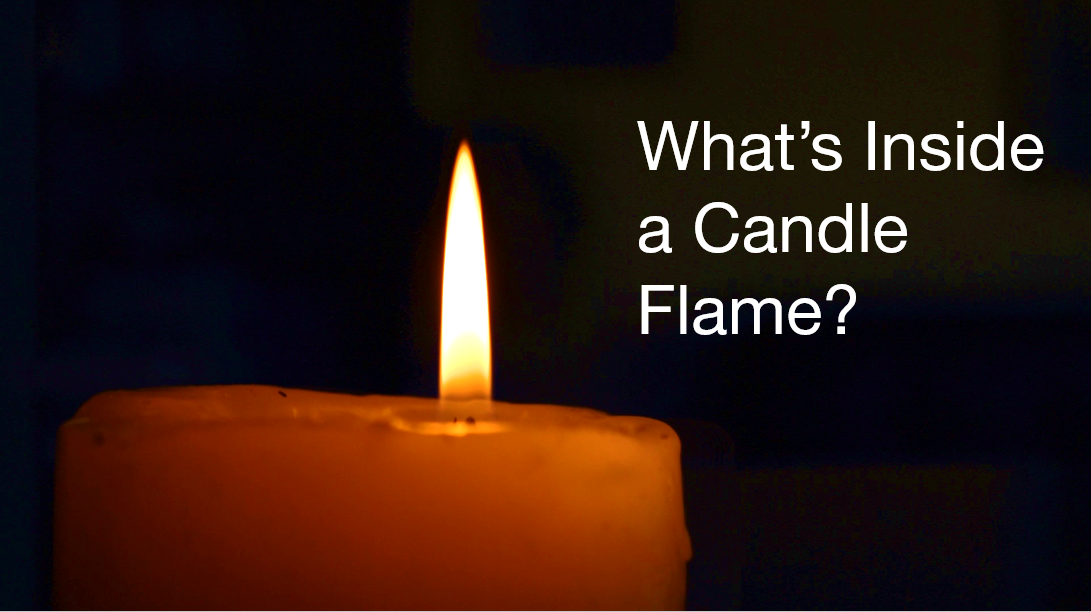 Have you ever wondered what is inside a candle flame? I bet you’ll be surprised. Our resident fire scientist, Taylor, takes a look inside the candle flame and teaches some fire science basics.

I can’t think of a fire more common than a candle. We use them every day for light, for decoration, in churches or on cakes. But do you ever stop to think about what goes on inside a candle flame?

Well 17th century scientist Michael Faraday did, and he says, “There is no better…door to understanding…natural philosophy than by studying the physical phenomena of a candle.” In other words, we can learn a lot about fire science by looking inside a little candle flame.

To understand why, we need to know about something called the Fire Triangle. The 3 sides of a Fire Triangle represent the three things that you need to sustain a fire: oxygen, fuel, and heat. The three sides of a fire triangle are a bit like the three legs of a stool. If you have all three of them, the fire sustains itself and keeps burning, but if you remove one, the stool falls over and the fire goes out.

So where do the oxygen, fuel, and heat come from in a candle flame?

Well, the oxygen is the easiest. It comes from the air. The air we breathe is made of about 21% oxygen, and fires can keep burning in air with as low as 12% oxygen.

How about the fuel? Well, when we light a candle, we hold the fire to the wick, but the wick isn’t actually what burns. What’s actually burning is the candle wax. The solid wax is heated up and melted by the flame, melting from a solid to a liquid. The liquid is then drawn up the wick, or “wicked up”. When it gets to the top of the wick, it changes phase again from a liquid to a gas. This wax vapor expands, moves away from the wick, and begins to mix with the oxygen in the air.

When the fuel and the oxygen are perfectly mixed, and they meet with the fuel from the flame, they react. This reaction produces more heat, which vaporizes more wax, and keeps the flame going.

Learn more about what goes on inside a candle flame by watching this video.

Wood Stove 101: How To Keep a Wood Stove Burning All Night

Woodstove 101: 8 Tips to Stop Smoke Coming Out of My Woodstove Door

Let us help you select your new wood stove!